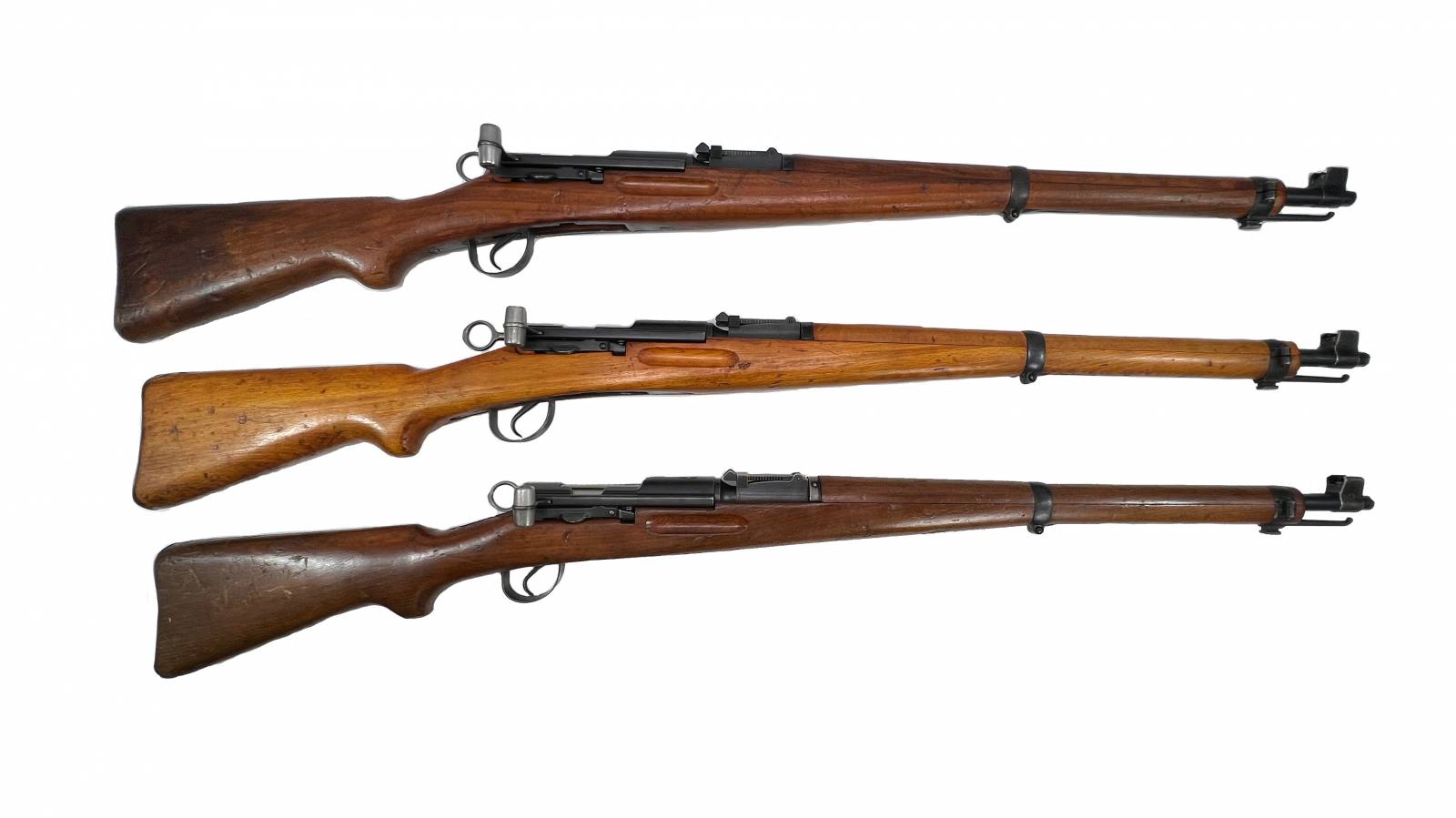 The rifles will all have:

Matching serial numbers on the receiver

No magazines are included with rifles

Rifles are sold as singles

Rifles may show signs of wear or handling marks

Stock coloring varys from light to dark. Not hand selected.

*Shipments to California MUST ship to an 01 FFL licensee!*

Check out our article below on the History of the rifles

The K31 was the first line weapon of the Swiss military from 1933 to 1958 when it was replaced by the Stgw 57 (SIG SG 510), a modern, detachable magazine fed, select-fire assault rifle. The K31's lingered on as reserve units as late as the 1970s. 528,230 K31's were produced by highly skilled hands, supervised by meticulous inspectors at the Swiss government arsenal, the Eidgenossische Waffenfabrik in Bern.
The K31’s appeal is its accuracy and the mechanical curiosity of its slick, light, straight-pull action. The shooter chambers and ejects rounds by pushing the bolt handle straight forward or pulling it straight back. The only modern production rifles that use a straight pull action today are very high-end European sporters like the Strasser R14 or the American Savage Impulse rifle.
For the military, the straight-pull action offered great speed and simplicity of manipulation. A soldier with a straight-pull action was expected to shoot more rapidly and accurately because the straight back and straight forward movement of the bolt was less disruptive to aim and took only two motions instead of the four (up and back, forward and down) needed for a turn-bolt action.
The two main weaknesses of a straight-pull action were: the complexity of its manufacture, and its very weak primary extraction of fired cases from the chamber when compared to the more leveraged camming force of a turn-bolt action.
The K31 was the apex of fifty years of Swiss straight-pull evolution. The action was designed by Colonel Adolph Furrer at Eidgenossische Waffenfabrik and introduced a drastically redesigned, shortened and strengthened bolt sleeve with the locking lugs on the very front to engage at the chamber for maximum locking strength and improved accuracy. The K31 was shorter, lighter, stronger, more accurate, and about 9% less expensive to make than the rifles and carbines it replaced. The reduction of overall action length was used to increase the barrel length and the sight radius was extended, both conducive to good accuracy.
The Swiss consider the K31 a carbine rather than a rifle. The K stands for “Karabiner” and “31” represents the “Model 1931” which was its designation when accepted as the new standard arm of the Swiss military in March of 1932. If you a think an 8.85 pound K31, with its 25.65” barrel and 43.6” overall length, is a bit big for a carbine, the Infantry Rifle Model 11 it replaced sported a 30” barrel, was 51.5” in overall length and weighed just over 10 pounds!
The K31 has an excellent trigger pull. To reduce the risk of nervous discharge, it was a two stage. After the take up, it brakes smoothly at four pounds. The geometry of the trigger, with its deep curve, is designed to consistently guide the trigger finger to the same spot. The muzzle crown is countersunk to protect in from accuracy robbing damage. The Swiss claim to be a nation of rifleman. This is the kind of weapon you would expect them to have.
K31’s safety is a large ring on the back of the bolt cocking piece that is easily manipulated by gloved hands. Vertical is the fire position. Pulling it out about an inch, turning it clockwise a quarter turn, and lowering it into the horizontal slot in the base of the bolt deactivates the trigger and locks the action. Protective ears shield the front sight. It feeds from a detachable six round magazine with a follower that holds the bolt open after the last shot. It has a thumb-cutout on the right side of the receiver for fast loading with a unique, economical, phenolic resin impregnated, paper charger or conventional metal stripper clips. The Swiss designed the stock to allow the barrel to free float by deeply inletting it so there was no wood-to-metal contact beyond the receiver ring except at the last inch where an adjustable front band held the ends of the upper handguard and stock fore-end together. The band could be loosened to liberate the barrel completely from deflection by the wood stock. The K31 had a stacking rod and bayonet lug on the front stock band.
The rear tangent sight can be set to ranges from 100 to 1,500 meters. Any windage or elevation adjustments needed for a particular rifle were made with the front sight blade. Windage is changed by moving the sight forward or back in its angled dovetail. (1mm of sight movement changes point of impact 4.7” at 100 yards.) To correct for elevation, they had front sight blades of varying height.
When the action was being put through trials, 150,000 rounds were fired through four guns with no significant issues noted. With the high quality of Swiss ammunition, and a clean action, I can believe that. However, I have to wonder if they ever threw those test guns in the mud during those trials.
There is only one other sovereign nation that elected to arm it forces with the K31. In 1955, one hundred K31s were purchased by the Vatican City for the Pontifical Swiss Guard.

DISCLAIMER:
If this is a used or surplus firearm it is not new, therefore, it must be inspected by a qualified gunsmith before firing. Firearm safety is the responsibility of every firearm owner. Become intimately familiar with the operation of your firearm before loading it. Treat every firearm as if it were loaded. Always point the muzzle of the firearm in a direction where if a discharge occurs no one will be injured. Use only factory loaded ammunition in good condition and of the proper caliber. Failure to follow these rules may result in injury or death. Prevent child access by always keeping guns locked away and unloaded when not in use. If you leave a gun loaded or unloaded where a child or unauthorized person obtains and improperly uses it, you may be fined or sent to prison or both. Firearms are dangerous and user assumes all risks associated with their use. Read all warnings and instructions provided with firearms or on carton before using.

What Customers Have To Say

28 reviews have been written for this product.

Stanley A
3rd time all charm

Bought 2 of the dealers choice and 1 from the light stock category. 1st was so good ordered the 2nd upon inspection. 2nd wasn't quite as nice but did have a troop tag. The 3rd was from the light stock collection.has tag and in great shape. Used layaway for 2 orders just to make sure to get them at the sale price. Easy process and quick will possibly order a fourth

Thank you for the fantastic review Stanley! We loved being of service to you and hope we can assist you again soon. - Centerfire Systems!

I like collecting Milsurp rifles and when I saw that Centerfire was offering up the K31 for $399 I had to jump on it. I was not disappointed. Mine is a 1942 model in walnut and is an amazing piece of history. It came with the sling and troop tag which was a plus. The overall condition was pretty darn good for an 80 year old rifle. The stock has some honest wear marks but is pretty good and intact. A little linseed oil and elbow grease mad the stock pop with a reddish hue to it. The bluing and bore are perfect. The grouping of the rifle is amazing and I can see why this is considered one of the best WWII era rifles ever made. Thanks to Centerfire for offering this up.

Joe, Thank you for taking the time to leave us your thoughts and this excellent five-star review! Please let us know if there is anything we can do for you! -Centerfire Systems!

Jonathan A
First gun was beautiful

I have purchased 2 of these guns. The first was beautiful with minimal wear and tear. The second one came in with fresh rust all over the barrel, barrel bands, and front sight base. The sight base was pitted. The rest was cleaned up. Overall the gun appears to be in good shape just not as well cared for as the first one.

Dear Jonathan, thank you for letting us and the community know about your fantastic experience with us and your order! We hope to see you again soon. - Centerfire Systems!

Joe F
Excellent Buy and A Piece Of History

I bought mine and was amazed. It is a 1942 walnut model and came with the troop tag and sling. I put a bit of linseed oil on it a few times and it shines. At the range it was perfect. Excellent buy for the $399.

Hey Joe! Thanks for the great review, and we value your feedback! If there is anything else we can do, please let us know! - Centerfire Systems.

I've always wanted a K31, and was finally able to buy one. Very pleased with the condition and action of the firearm. Troop tag intact under the butt plate. Aftermarket mag worked flawlessly. Great shooter!!

Hey David! Thank you so much for reviewing the K31 you received from us. If you need anything else, let us know! - Centerfire Systems!

We specialize in the sale of firearms, ammunition, magazines, military surplus, tactical gear and more. We like to stack'em deep and sell'em cheap, so you can expect to find great prices on all the things you need!